Aesthetics of Solar Panels — Do They Look Ugly or Awesome?

You are here: Home / Solar in Virginia / Aesthetics of Solar Panels — Do They Look Ugly or Awesome?

If you’re thinking of getting solar, I’m sure you’re familiar with the old debate about whether solar panels look good on your roof or not.

As with anything, beauty is in the eye of the beholder. But when we asked our customers and looked around the web at what homeowners with solar think, we found three basic answers.

Beauty Is as Beauty Does

Some of our customers seem to think that beauty is as beauty does. That is, when it comes to solar technology, function trumps form. Because solar panels save you money and help you reduce pollution, then their function makes them beautiful.

A lot of people in Virginia with solar these days seem to agree. For example, take the discussion last year on a Charlottesville real estate website. There, homeowner Chris Bruce put it well:

The aesthetics of the solar panels on our house are a non-issue. And even if I did care what they looked like I’d get past that rather easily when I see that our electric bill has been $7.70 a month for the last 8 months (that’s what Dominion charges to be connected to the grid and do net-metering)…One other point – we just had an appraisal done so we could drop our PMI and the appraiser credited the value of our solar installation at slightly more than what it cost to install.

Other commenters on the site agree. “[Aesthetics are a] non issue. Net positive. Waiting for first house in our neighborhood to add them,” says David Storm. And Jeff Cornejo thinks that “modern solar is not ugly and, if anything, should help resale.”

Of course, he’s right. A new study by Berkeley National Lab says that the average solar system will add about $15,000 to the value of a home across the US. And depending on where you live in Virginia, that extra value may be exempt from local property tax.

Other solar homeowners, including many of our customers, think that solar panels look great in themselves.

As writer Tara McIsaac explains, sometimes it’s just a question of people getting used to a new technology. “Cities and towns have had to incorporate new elements for centuries, even millennia. In the past couple of centuries, many modern elements of city infrastructure have appeared, including telephone and electrical lines.” She goes on to explain:

When electric lines first appeared in front of the Paris Opera House, people weren’t too keen on it. But, “Once Paris decided it was going to be modern … people got used to it,” said Emanuel J. Carter Jr., an associate professor at the State University of New York’s College of Environmental Science and Forestry specializing in city planning.

Mark Durrenberger, a solar installer in Massachusetts, says that solar panels will be more attractive if installed properly. For example, the panels should be evenly spaced, they should cover most of the roof section and wires and hardware should be well hidden. Durrenberger even offers a photo gallery of solar installations that are good, bad and ugly.

We follow the same principles in our installations and we humbly offer a small gallery below of solar we’ve done at our own customers’ homes in Virginia that we think you’ll find breathtaking.

Solar You Want People to Notice

Finally, some of our customers actually want their neighbors and visitors to notice that they have solar.

Since they went to some trouble and expense to get solar in the first place, they don’t want to disguise it as roof tiles as Tesla’s Solar Roof would do. No, these homeowners care about going green and they want to encourage others to get solar too and help save the earth.

So, for them, solar is about being loud and proud. Don’t hide it — flaunt it, so to speak. 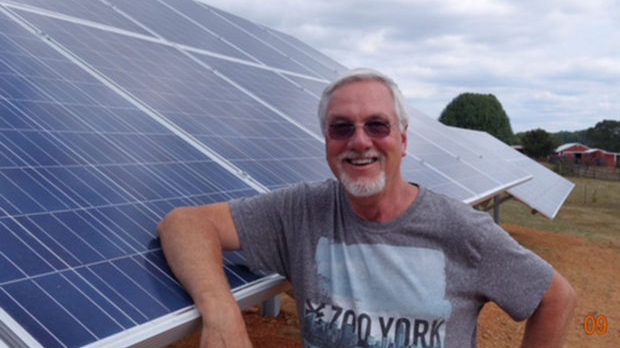 For example, our customer Steve Thomas lives on a 58-acre farm in Rocky Mount near Roanoke. His solar panels are ground mounted and he enjoys showing them off to people — Not to brag, but to get others excited about solar. Steve likes being in control of his own energy and he likes being part of a movement bigger than himself — the movement to cut fossil fuels and help fight climate change.

We’re glad that Steve thinks that his 10.5 kilowatts of solar looks great.

“Main Street Solar are good craftsmen and they did a model installation. I’m an engineer, so I can appreciate that.”